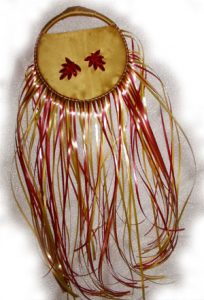 Basically a praise ring is a circular object that is usually 6 to 9 inches in diameter. It is similar to a tambourine in that it has a cover or skin across the circle, but normally they are not as deep. They generally have ribbons or streamers
around the outside edge so that they can create a stunning visual effect.

What is it used for?

Most of the time, praise rings can be seen as a representation of God’s glory. They are beautiful objects in their own right. Interestingly, some of these adornments were used at wedding celebrations as well as religious ones, which is an interesting thought, as we are supposed to be practising to attend a wedding feast.