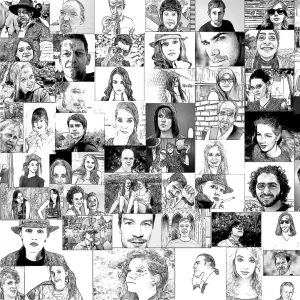 Imagine a Christian community that worked together to meet the needs of the people around them. Some knew how to earn more money than they needed to survive and gave the remainder to the community’s projects. In fact, loads more money so that they could fund many different projects. Some in the community had enough money that they could follow the example of John Wesley and give away 90% of their income without sacrificing their ability to live comfortably. Some were project managers running projects. Some worked in the projects serving individual people. Some were bookkeepers. Some were IT experts. Some did the admin.

Everyone had a role within the community. Some were project managers running projects. Some worked in the projects serving individual people. Some were bookkeepers. Some were IT experts. Some did the admin. They did this so that they could run a range of projects that worked together to help people in need.

Someone could come into the café run by the community. They then met people who were support workers who hung around the café waiting to talk to people in need. The support workers acted as signposts to other projects run by the community. This might be the job club or the furniture restoration project that also helped to restore people. As the support workers identified more needs they found ways of meeting those needs. These could be projects run by others that they had listed on a database of trusted sources of help that they could point people towards. Or it could be that they

Over time the support workers had identified more and more needs and had found ways of meeting those needs. Sometimes they directed people to projects run by others that they had listed on a database of trusted sources of help. Or it could be that they recognised the need to set up a new project so pointed out the need to other members of the community so that someone could do something about it.

Everything worked together. Even the housebound had a role as they were the prayer warriors and without their support, everyone would find fulfilling their role so much harder. Everyone had a role to fulfil as there were as many ways to serve others as there were people.

Where did this community gather?

The strange thing about this community was that its members did not all go to the same church on a Sunday. They had some minor differences. Some broke bread together others said Mass, some attended Eucharist, some had communion services. Like any other group of brothers and sisters, they were not identical but loved each other and worked together towards the same aim of doing what made their Father happy. In this case, it was providing a support system to the people around them.

Although their focus was on serving others there was also time and space for them to focus on who God is and what He has done for them. There were many different ways they did this. Some focused on visual experiences but those who preferred to do this with their other senses or used other ways were not forgotten. They loved and accepted each other so much that there was considerable give and take about how they connected with God.

Some Christian communities do a lot to serve the people around them but there are few if any that have managed to reach this kind of level. Yet this is just the tip of the iceberg as behind the scenes is a training centre. This is where the people who have come in struggling are helped to become the people who help the next generation of people in need who approach the community for help.

As people work on creating a new life for themselves they are helped to learn to read if necessary. Any other gaps in their education are filled as well. They are supported as they learn to manage money better and find new ways of earning money. Their home goes from just orange box furniture to one full of comfortable items that are not necessarily new but that build their self-esteem. They have all they need and their home is a place where they want to live.

Life is easier because they have learnt the practical skills that once made it harder for them to have a comfortable life such as doing the laundry, cooking for themselves or gardening. They even have the opportunity to experience a complete restoration so that the underlying issues that have caused them problems are resolved.

There was no shortage of resources because people knew how to use the resources that they had. People who that they were given things to use and used what they had wisely, that could be money or experience. They knew that if they gave what they had it would be stretched to meet the needs around them.

They used biblical principles but did not put people in straight jackets and force them to do this because they Bible says so. Experience had shown them the best ways of helping people, which was not always what people expected. They gave and God multiplied. God then gave again and it was multiplied again.

They had started small doing what they could but then once God knew He could trust them He brought more and more people to them for help.

That is some community but it is the best that I can do to explain what I would like to see from something like Lily’s Place in action. You can find out more about that vision here.