I am Susan and my background is teaching adults, especially those who want to use a computer. I have also taught A level Religious Studies. It was that which helped spark my interest in business and ethics.

Another of my interests has been e-learning and I even looked at that while doing Post Graduate course in Multimedia Applications at Teesside University. It is hard to believe that that was over 15 years ago now, no wonder they offer completely different courses today.

It might be a long time ago but I have kept up my skills in that area. If truth be known I have learnt a whole load of shortcuts as more people have developed products that make creating websites and running online courses easier and easier. Not only that but I have become more familiar with how the online business world works.

That photo is definitely Susan the human being. It’s a selfie of me. The problem with those things is that we can get so critical of that little thing that is not quite right in our own eyes. I can spend hours taking pictures and then not be satisfied with one of them.

One day I will splash out the money needed for a professional photographer and have some photographs that really portray the essence of who I am. Until then I will make do with speaking into my phone and telling it to take my picture so that at least I have a chance of getting a picture that is in focus.

Maybe it does tell you something about me in that if I cannot do things in one way I look for another way of doing them. No wonder why those who know me think my mind works in mysterious ways pulling ideas together to come up with solutions to problems.

That photo also gives you a flavour of what I am about. An ordinary woman, nearer the age of collecting an old age pension from the British government than she would like to admit.

In one sense that is the problem. This should be the time when the harvest from all the good choices made earlier in life will be gathered in. Oops, that is not really the case. I have made some good choices but also some really bad ones.

I thought I had found Prince Charming but found that I had kissed a frog instead. Yes, I know the story is supposed to be that the princess kissed a frog and it turned into Prince Charming. I got it back to front and ended up in a nightmare that God had to rescue me from.

Many financial highs and lows

The problem is that that have been more lows than there have been highs. Lows like Prince Charming’s job disappearing in December. The new year started without knowing where the money would come from to pay the bills. This did not happen just once but in two separate years.

Lows like the entire industry that supported Prince Charming at the beginning of his working life disappearing largely due to policy decisions made by the government. It took ages to climb out of that hole because it proved necessary to make a radical redirection after re-training.

Highs like being provided with a number of homes by divine providence. There was the time when I had to move out but could not find somewhere to go. On the day when the final deadline fell someone came to me and asked me if I wanted to move to somewhere nearby.

Then there was the time when I had just decided it was time to move house and went to visit the church I was thinking of moving to. They were saying goodbye to someone that day and I overheard a conversation that started have you sold your house yet. I pricked up my ears and asked them if it would fit in my budget. It was so I arranged a viewing as soon as possible. A few weeks later once all the legal paperwork was sorted I moved in.

I have been close to the cliff edge in terms of finances more often than I would like to have been. Yet I have always managed to come away from the edge. I know what it is like not to have two pennies to rub together.

This includes needing to pray for inspiration about what to do for lunch after realising that I could not do sandwiches as we had no bread. Not only that but we had no money to buy any until the following day. The answer was make some plain scones and chop some pickled onions to add to a tin of tuna. Result one tasty lunch.

Why a Christian bias?

It would actually be quite difficult not to have a Christian bias. I was christened as a baby and confirmed as a teenager within the Church of England. Then baptised as an adult and joined a non-conformist chapel in 1986.  After a short sojourn in the Pentecostal church, I seem to have got a taster of many different styles of worship and even church governance.  After all those years sitting under Christian teachers, it would be very difficult if not impossible to have a Christian bias.

I have seen and heard a number of controversies along the way especially about money. We don’t do this that way because we think that is wrong and we think they are foolish because they do don’t do this. There are many different challenges and the only answer is love and acceptance. I have even heard the occasional controversy about what the basic beliefs of the faith are. The answer to that question as far as I am concerned is that I have no problem accepting the Apostles Creed.

I have a huge vision for the future that includes something that I have called Lily’s Place. This website is part of the plan for developing Lily’s Place. You can find out more about that vision using this link to the God’s Lily website.  However, in a nutshell, Lily’s Place is about turning lives around. The aim is to provide for the needs of people who are so knocked out by the events of life that they can barely think straight and move them forwards so that they become the next generation of helpers for Lily’s Place.

There are two things that that this website needs to achieve to make Lily’s Place into reality. One is to provide a means whereby people can learn more about how to use money wisely so that they can contribute to Lily’s Place and other similar projects. The other is to build up the resources that will enable Lily’s Place to grow and develop.

You see those comments on the introduction page about not having the money to be able to contribute in the way I want to contribute is exactly where I am coming from myself. 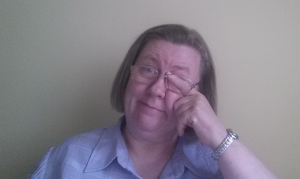 This is another of those selfies I did the day before I wrote this. I was messing about rubbing my eye while speaking to my phone telling it take a picture. When I looked at all the images I had on my phone and saw this one I had to find somewhere to put it. After all, I only have one eye open and this site is called Money Eyeopener. Something else you now know about me i.e. there are times when I see things in a quirky way. It all adds to life’s rich tapestry.