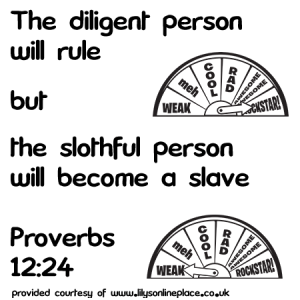 Diligent that is an old word. It is not one that we hear very often these days. I knew it has something to do with hard work but there had to be a slight difference in meaning or there would be no need for another word.

To make sure I knew what it meant I checked my dictionary. It also includes the idea of being careful. So a diligent person is someone who does something with care and by putting serious effort into what they do.

A sloth is an animal. A sort of primate that you usually find in South America. To be honest some of the pictures on Wikipedia show cute faces. Why compare a person to an animal? Looking at the dictionary it appears that it was the other way around. Sloth is the desire to avoid all activity or exertion. Well these are slow moving animals so the word fits their behaviour.

Someone who is slothful is inactive and avoids exertion. We might also call them lazy or idle. Another old word used for this attitude is indolent. Gain this is someone who avoid work and exercise. In this case, the word comes from the Latin meaning not suffering pain. So they did not want the pain of work or effort so did not do much if anything.

What does it mean in practise?

It is a wise saying that is supposed to act as a warning. Many people want to be a rockstar but not everyone wants to put in the hours of careful practise in order to achieve that goal. It is not just the performance on stage that makes a rockstar but the hours spent behind the scenes to develop those skills.

One of the ideas Malcolm Gladwell made popular in in his book Outliers is that it takes at least 10 000 hours of practise to develop the skills needed to truly succeed in a particular field of endeavour. Umm modern research seems to be supporting ancient wisdom.

There are  many reasons why people succeed or climb to the top of the tree in a particular field. One is that they are prepared to put the effort in to build the skills, build the networks, make the connections and generally do what is necessary to achieve.

The alternative is not to put the effort in to avoid the pain of doing what is needed to succeed. The result of this is to become a slave i.e. someone who works for another but does not have the freedom to do what they want to do. You might not end up being actually owned by someone but they will control what you do. What you want to will not matter. The only thing that will matter is what those in control want to see done.

No wonder it is given out as a warning.

An example from history

This story goes back to the 19th century. Britain was changing and changing fast. In order to run an Empire and managed the changes brought by the Industrial Revolution it was necessary to have an educated workforce.

It was possible for children to access education but there were gaps in what was provided. There were also various challenges for parents who wanted their children to go to school.

The government finally passed an act of parliament in 1870 with the intention of enforcing universal education. The idea was to fill in the gaps and build new schools so there were enough school places for all children aged between 5 and 13. There were no excuses they had to go to school.

Prior to this many school places were provided by churches or just the clergy working from home. Thirty years later there were far fewer schools associated with churches. In fact it was mostly Roman Catholic churches that had kept their schools going. They were prepared to put in the effort required to provide education for their young parishioners.

Other church groups did not put the effort in. They allowed others to provide schools. They pulled back from their efforts to educate the masses. Today when you talk about faith schools in England and Wales those that have survived from the 19th and early 20th centuries are usually associated with the Roman Catholic church.

What  has happened to the others? They were not willing to put the work in to keep their distinctive approach to education. Today they hardly have any say in what happens in schools. Often times they are horrified by what ideas children are subjected to. Ideas that are not in line with their principles and values. They have lost control  and it seems at times as though they are like slaves.

This is just one example of things being too hard and then the government providing alternatives. The church then retreated from helping society in that way. As a result they have lost their influence and there are times that it is hard to do what they once took for granted as others are in control.

Who then is in charge?

Imagine two people who started in the same situation early in their working lives. One worked hard and carefully and the other was fearful of hard work. It does not take much imagination to work out how the one who worked hard could end up controlling the destiny of the one that did not.

The thing is your destiny is in your own hands or rather as this proverb says is in your willingness to work hard and carefully. No work no effort no achievement and others will control your destiny.