The Proverbs 31 woman is one of the most annoying characters in the Bible. She is that mythical creature that normal women measure themselves by and find themselves wanting. How does any normal, sane, sensible woman reach those standards?

When you look at where the advice comes from you soon realise the problem. The Proverbs 31 woman is a distillation of advice given to a king by his mother. For many women the hardest woman to please in their life is their mother in law. If you want to read the job description for a wife written by the mother in law you need go no further than Proverbs 31.

The Proverbs 31 woman does good to her husband

The text boils this down to a simple piece of advice. She makes sure that he has everything he needs. He does not have to go anywhere else to get his needs met because she takes are of him so well. That in itself is a pretty tall order.

For many of us meeting our husband’s needs is pretty much impossible. There are some men who are just so needy that not even the perfect Proverbs 31 woman could meet their needs. Men who fall so far below the mark themselves, that even this biblical superwoman could not be the sort of help meet that they are looking for. 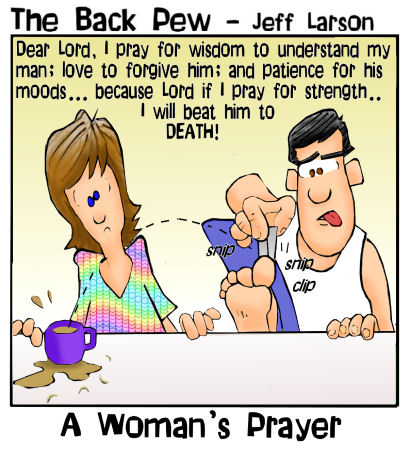 Thankfully the advice given to the son just before describing this superwoman is to avoid two of the major dangers to his marriage. His mother does not want her son to be led astray by loose women or strong drink. I mean who wants a lecherous alcoholic for a son or a husband. A good wife will want a steady sober husband who only has eyes for her.

Something that struck me reading this passage was that the son was to leave strong drink to those who are dying. Somehow I don’t think that anyone who produces alcoholic drinks would be pleased with the idea that their product is really for those who are dying. Although anyone who has entered the world of someone with a drink problem will understand what she means. They will also understand what she means by alcohol being used to cover up the misery or the lack in their lives.

Alcohol is a popular coping mechanism. If the husband of the Proverbs 31 woman does not need to use alcohol as a coping mechanism then he is highly likely to be easier to live with than those who do. If nothing else there will be fewer of the additional issues like finance and unruly behaviour while under the influence of alcohol.

Once he has been warned of these dangers that passage tells him what he should do. His mother wants him to be a fine example of carrying out his role in society. The advice on being a good king given here could also be applied to many different occupations.

He is to make sure that the poor and needy are not trampled on by the rich. He is also to defend those who cannot defend themselves. He had to deal with complaints from people about how those stronger or more powerful than them had treated them. See what I mean, many people have to do this as part of their everyday activities.

If this is what the husband is supposed to be like at least this is a relatively balanced discussion. Too many of those aiming to be a Proverbs 31 woman do not have a Proverbs 31 husband.

The advice to avoid loose women, strong drink and be all that you should be in terms of your role in society at least means that he is a tolerable husband. Not a perfect one but at least he does not have one or more of the three major issues that make a man a difficult husband.

What is involved in being a Proverbs 31 woman?

She starts early, finishes late and in the middle has a well organised home. Up doing breakfast and assigning duties to those who work for her before first light. To bed late as she keeps her lamp burning well into the night. In the middle she keeps herself busy.

No slacking here. She is not a slouch. She works hard and you can tell because her arms are strong and firm. It is not just physical strength but she has knowledge and wisdom as well. No wonder her efforts make her a success in her own right.

Financially she does not have to depend upon her husband. She can take care of herself. In fact he is free to do what he is called to do in the community without being concerned about where the money comes from.

This is partly what interests me in her. In Financing Kingdom Work there is a chapter on Using your own money and in that there is a section on household earnings. There are many people who work in the community while another member of their household has a job or runs a business that brings in the money to pay the bills.

I have been trying to put together the content for a money course. There were just so many ideas that I was getting confused what to put in and what to leave out. So the cry went up “Help Father, what do I do”.

God’s answer came in a way I did not quite expect. He gave me a page number for the bible beside my bed. I looked at it and it was the Proverbs 31 woman. It only made sort of sense the first time I read it. A day or two later I read it again and I saw many good ideas related to handling money. It made sense to use that chapter as a way of deciding what to include in the course and what to leave out.

The secret behind the success of the Proverbs 31 woman

The last part of the chapter gives away this secret. Maybe there are two interlinked secrets. One is her character. The other is her relationship to God. You see her reverence and respect for God and His ways will have developed her character.

The idea is to develop a good relationship with God and do things His way. Doing things His way is a personal development plan like no other on earth. His Word is full of good advice about how to deal with many different aspects of life.

It is amazing how many times you follow the advice in the Bible and the situation improves. On the other hand many times you pick up good advice from the “experts” who have discovered ideas for themselves only to find that idea mentioned somewhere in the Bible.

This is why I was so pleased that I was given the idea to base a money course around the ideas seen in the Proverbs 31 woman. This is an exciting adventure that I am looking forwards going on. I just hope that you are able to join me.