I had this passion to do something to help those in mental distress. After all, I had seen so much close at hand. Nothing too serious, the diagnosis was obsessive compulsive disorder and associated depression but it was serious enough to wreck a family and a home. That then led to a personal challenge as I ended up with shellshock. Well that was what the man who stood up in a meeting and said God had a message for me called it and when I looked up the symptoms I could see he was right.

I had been through a nightmare but had managed to find a way out with God’s help. No wonder I wanted to help others. So I started doing some voluntary work and it soon became obvious that there was not just a sea of need but a vast ocean.

What could I do? I tried to run some workshops, but some crazy things happened to de-rail those. Not only that but the financial side of that venture was a disaster so I tried another direction. If face to face events did not work well what about moving into the online world so as you will see that is what I have done.

In the beginning the dream of Lily’s Place

I had this dream of what the organisation I set up was supposed to achieve. I do really mean a dream, one of those night visions that you wake up with and are able to write down. Well, I did ask God what He wanted what the project I was working on to become. This is is the neatly typed version of what I wrote down. 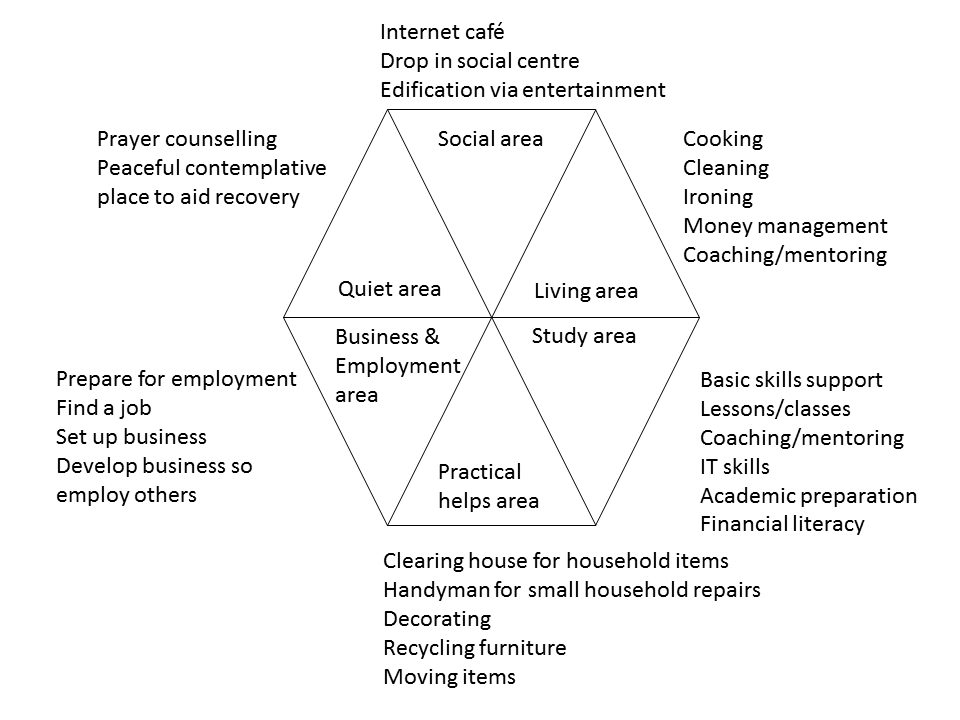 Even if the type is too small to read there is one thing that you will be able to work out. That is a big vision. There are six areas, and there is a list of ideas for each area. So in the social area, there is a cafe and the opportunity to join in with various social activities. In the living area, there would be the chance to learn home-based skills like ironing and cleaning.

List everything together and you have a project that would supply just about everything someone facing mental distress (or just hard times) would need to help them rebuild their lives and climb out of a pit of despair. The only thing it does not do is provide people with a roof over their heads.

As if that was not big enough that shape is a hexagon and hexagons tessellate. What! Well, they are a great shape to use when you want to cover a large area as they don’t overlap or leave gaps. Not only that but the distance from the centre to the perimeter is just about the same in every direction. Help does that mean that there should be hundreds of these hexagons? Covering the whole country, and even the whole world.

Gulp – or am I really going mad

They took advantage of the communication technology of their time to get around. The Romans, of course, are known for the roads that they built to move their troops around but everyone else could get around better as well. As you are reading this on a computer you will know that communications technology has changed a bit but it is still there to be used by anyone who wants to use it and for whatever they want to use it for.

Why is it necessary to re-invent the wheel?

Hold on a minute though aren’t many of those things provided by either the welfare state or existing projects?  Since that dream, it seems as though there has been a nibbling away at the level of help that people receive from the welfare state. It has become harder and harder to survive on the money the government gives the poorest in the UK. Services are becoming more and more stretched as they are expected to do more with less money.

Since this revelation there have been new layers added to the ideas of the way forward should be. One of them is the description I wrote of my dream community. That was a way of expressing a number of different ideas that had been percolating for a long time.

Another layer was added by the five dimensions of training that I wrote down after asking God what I should be teaching. That is another answer to the question of why re-invent the wheel. Many people and organisations offer training in two or more of those dimensions. There are very few that offer all five or fill in the gaps so all five are covered.

Not only that but there are those who suggest that we are only at the start of the retreat of government from supporting the community. Their reasoning is that countries are no different from other smaller economic units like families, in that if they borrow too much money they will get into difficulties. When this happens families and businesses find they have less to spend on what they previously thought were essentials.

If the kind of financial disaster some people are predicting does actually happen, there will be a lot of hurting people. There will be many people looking for ways to rebuild their lives and the safety nets that they once would have expected to fall back on will not be able to take the strain. If that is the case then things like Lily’s Place would be needed to support the community. Communities that acted like the dream community would find it easier to survive.

On the other hand, if this kind of financial disaster is avoided somehow there are other situations when Christians step up into the breach and support the community in its time of need. It could be a flood or a serious fire. That is without considering the times when Christians fill in the gaps and support the community. Developing this kind of community support will never be a waste of time and effort if is God orchestrates it.  He could actually be preparing His people so they are ready when disaster strikes.